Captivating images of planet-forming discs around young stars have been captured by astronomers – and they could hold clues to the origins of Earth-like worlds.

An international team of astronomers used the Europe Southern Observatory Very Large Telescope in Chile to take 15 images of the inner rims of planetary discs.

In the images astronomers found ‘bright spots’, hinting at the processes that lead to the formation of planets – possibly through instabilities in the disc.

The protoplanetary discs are formed in unison with the star they surround – dust grains in the disc merge together to eventually produce Earth-like planets.

To capture the images, which show the details of creation in more detail than has been imaged before, they combined light from four telescopes.

Scroll down for video

This image shows a star called HD45677 with its large planetary disc that goes out as far the the orbit of Jupiter in the solar system – about 5.2AU. This disc is where planets are born 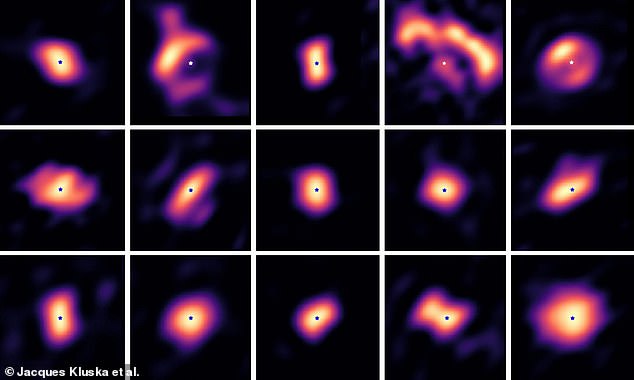 The team also used a mathematical model to ‘reconstruct’ parts of the disc – which is hundreds of light years away – not captured by the telescopes.

This technique is similar to how the first image of a black hole was captured.

‘We had to remove the light of the star, as it hindered the level of detail we could see in the disks,’ said lead author Jacques Kluska from KU Leuven in Belgium.

To understand how planetary systems, including our own, take shape, you have to study their origins – such as these discs.

The dust grains in the disks can grow into larger bodies, which eventually leads to the formation of planets. 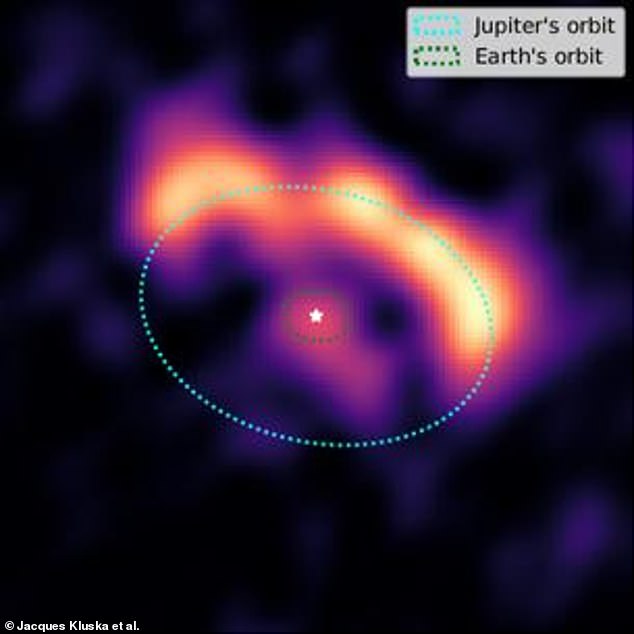 Rocky planets like the Earth are believed to form in the inner regions of protoplanetary disks, less than five astronomical units from the star around which the disk has formed.

That is what these new images capture – they all show the disc that forms within the inner part of a system – within the orbit of Jupiter.

Before this new study, several pictures of these disks had been taken with the largest single-mirror telescopes, but these cannot capture their finest details.

‘In these pictures, the regions close to the star, where rocky planets form, are covered by only few pixels,’ says Kluska.

‘We needed to visualize these details to be able to identify patterns that might betray planet formation and to characterize the properties of the disks.’

This required a completely different observation technique. ‘I’m thrilled that we now for the first time have fifteen of these images,’ Kluska continued.

Distinguishing details at the scale of the orbits of rocky planets like Earth or gas giants like Jupiter is equivalent to being able to see a human on the Moon.

Jean-Philippe Berger of the Université Grenoble-Alpes, a principal investigator in charge of the VLT PIONIER instrument for the investigation said it was a challenge.

‘Combining this technique with advanced mathematics finally allows us to turn the results of these observations into images.’

Some findings immediately stand out from the images, according to researchers. 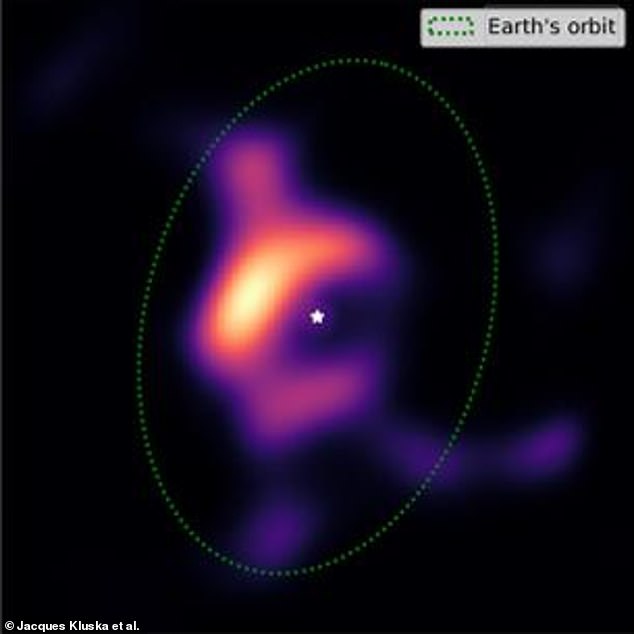 Captured with ESO’s Very Large Telescope Interferometer. The dotted line gives an idea of the orbit of the Earth in comparison to the disc – almost all of the material here is within Earth’s orbit

‘You can see that some spots are brighter or less bright, like in the images above: this hints at processes that can lead to planet formation,’ they wrote.

‘For example: there could be instabilities in the disk that can lead to vortices where the disk accumulates grains of space dust that can grow and evolve into a planet.’

The team now plan to carry out additional research to identify what might lie behind these irregularities found in the disc.

The next phase of the study is to try and observe a planet being born.

Kluska will also do new observations to get even more detail and to directly witness planet formation in the regions within the disks that lie close to the star.

Additionally, Kluska is heading a team that has started to study 11 disks around other, older types of stars also surrounded by disks of dust, since it is thought these might also sprout planets.

The findings were published in a paper called ‘a family portrait of disk inner rims around Herbig Ae/Be stars’ in the journal Astronomy & Astrophysics.

According to our current understanding, a star and its planets form out of a collapsing cloud of dust and gas within a larger cloud called a nebula.

As gravity pulls material in the collapsing cloud closer together, the centre of the cloud gets more and more compressed and, in turn, gets hotter.

This dense, hot core becomes the kernel of a new star.

Meanwhile, inherent motions within the collapsing cloud cause it to churn.

As the cloud gets exceedingly compressed, much of the cloud begins rotating in the same direction.

The rotating cloud eventually flattens into a disk that gets thinner as it spins, kind of like a spinning clump of dough flattening into the shape of a pizza.

These ‘circumstellar’ or ‘protoplanetary’ disks, as astronomers call them, are the birthplaces of planets.